A few weeks back I started on a loop antenna.  Partly out of a lifelong fascination with the concept, partly out of trying to eliminate the horrible noise my G5RV picked up. HF was almost unlistenable aside from the strongest stations.

I finally managed to get the rest of the supports hung and, tada, she's up.  It's MUCH larger than I had estimated with Google Earth. Initially I thought I'd have maybe 300 feet of wire in the air. In reality, I barely had enough wire to loop the yard and have enough left over to feed down the tower. So, counting the portion of the antenna which is essentially open-wire feedline, I have a full 500' of wire in the air.

Overall height ranges from approximately 15 feet at the lowest to 30' at the highest. It's a bit more trapezoidal than I would prefer, but adjustment of two corner supports on the East side should alleviate some of that. Essentially let that Northeast point in and pull the Southeast point out. 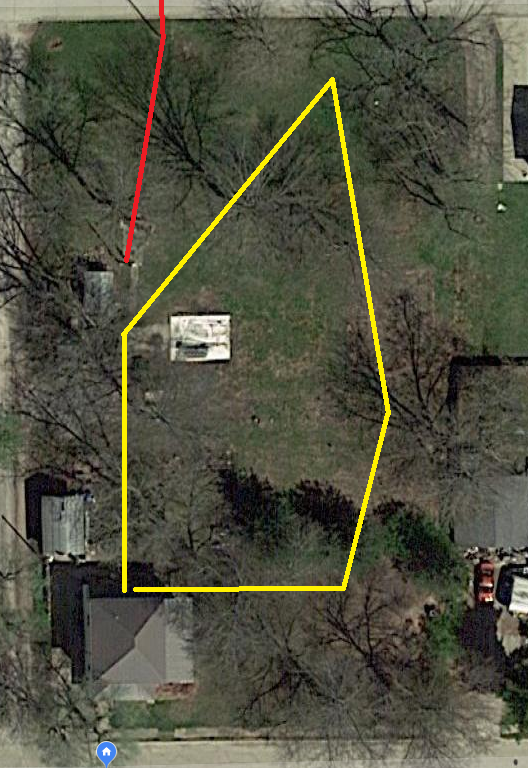 The Northwest corner is, unfortunately, lopped off due to a power line where the red is. Long-term, I'd like to remove it. It only feeds a utility light and an unused service box for an outbuilding I tore down. But I imagine that would cost money and... well.. I'm cheap. A lopped-off loop will do fine for now.

To attach the loop at my tower, I used turnbuckles and some random springs from the farm store. (Click the photos for larger views) 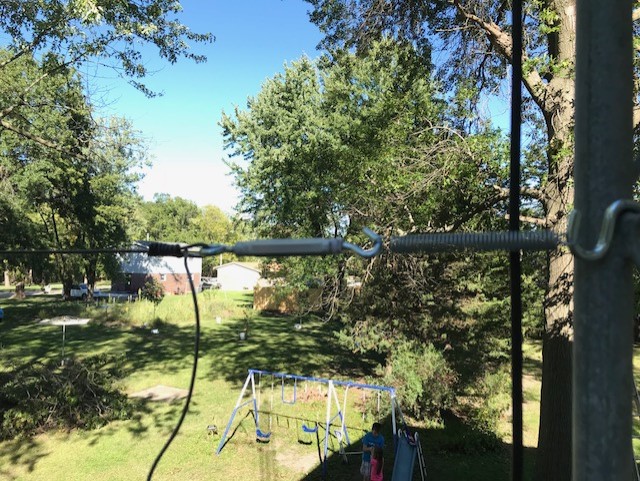 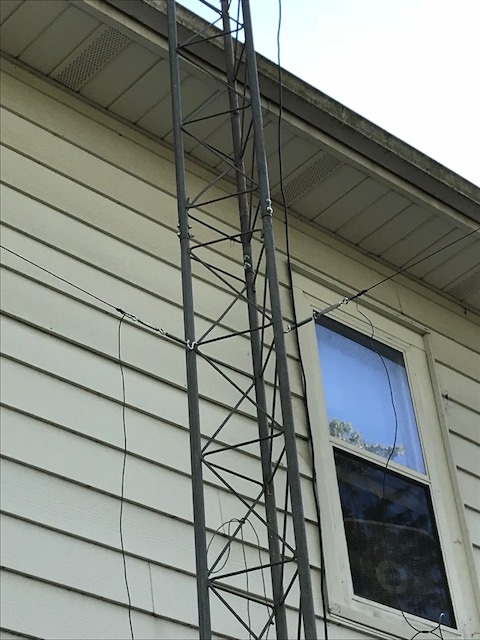 I wouldn't be the least bit surprised if the turnbuckles fly off the tower after the first windstorm. Everything is held up there by the tension from the springs, so if it "moves in on itself" too much, tension will be lost and everything has the potential to fall apart. But this is an experiment more than anything, so we'll see how it goes.

For initial testing I used the 1:1 balun that was on my G5RV. The antenna loaded on 160, 40, and 20 meters. Eighty was an abysmal failure with more noise than the G5RV I'd replaced. I will soon be trying a 4:1 balun, which is what I should have used in the first place, and seeing how it works.

The noise reduction on 20 was fantastic. The G5RV regularly had S5 to S7 noise levels on all bands. 40 was reduced a bit, but 20 went all the way down to S1-2. Fantastic! The transmit range, based upon the RBN, wasn't much better, but at least I can hear something besides static.

This weekend I'll be installing wooden standoffs on the tower to guide the wire down to about 4' above ground level.  There I will mount a box to house a knife switch to ground the loop when not in use, along with a ground bar for other feedlines coming off the tower.  Eventually I'll have a 2m SSB beam atop the tower, along with (hopefully) my 3-band HF beam.