Mia Khalifa, Internet superstar made famous for surgically modifying her body and then videoing people doing all sorts of perverted things with it, is apparently grossed out by tattoos of her. 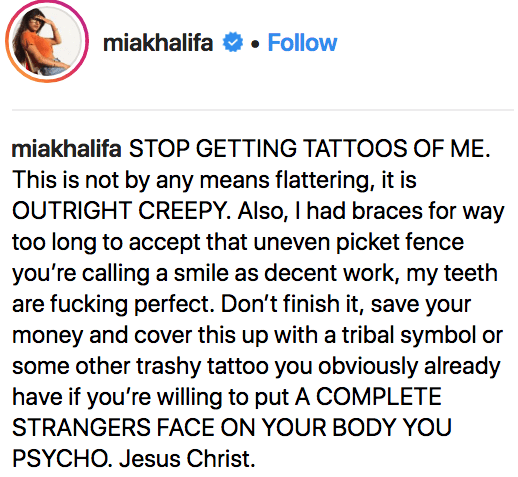 What to say.  My goodness.

You rose to stardom by letting people ejaculate all over you.  That is the only thing you have “contributed” to humanity.  Nobody would know who you are if you hadn’t stripped down naked and showed off your plastic-fantastic body.  And you’re surprised when that draws the attention of creepy people?

I think this guy summed it up pretty well.

(And don’t give me the “her body her choice” nonsense.  Yes, she’s got full right as a human being to do whatever with whomever whenever she (or the director) wants.  That’s not the point.)